The useR! survey gathers responses to questions on different themes for 455 attendees: demographic characteristics, R programming and involvement in the R community. The separate analyses of each question in each theme are detailed in the posts Mapping useRs, useRs Relationship with R and Community Involvement of useRs. A multivariate analysis of the R programming questions is detailed in a companion report. Here, we perform MCA on the R community questions.

Questions are the following ones:

MCA summarizes the relationships between the categories of the R community variables. 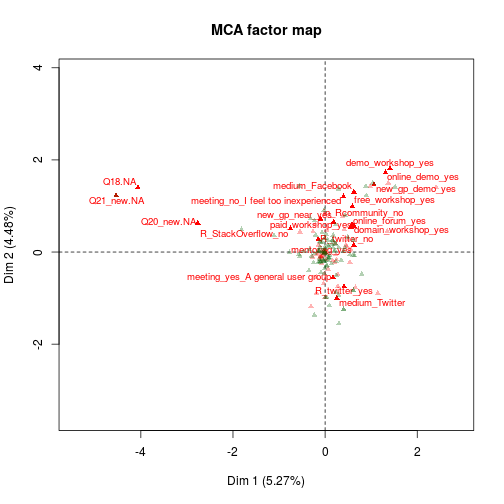 To interpret the main dimensions of variability in the response profiles, we study the proximities between categories. Indeed, two categories are close on the graph if most respondents taking the first category also take the other category.

The first dimension (horizontal axis) opposes people that didn’t answer questions about involvement in the R community on the left, to the others on the right. More precisely, they did not answer Q21, Q18 and Q20 and did not check any boxes for the other questions (_no). Individuals with the smallest coordinates on the first dimension work more in the industry; this is confirmed by a statistical test, but this remains difficult to interpret.

On the top, there are respondents who do not attend an R user group because they feel too inexperienced. They think that they would be more likely to participate in the R community or to improve their experience, if a user group, a workshop, or an online support dedicated to their socio-demographic group would be available. Facebook would be their preferred medium for R community news. They do not use Twitter (question Q19_B), (the category R_twitter_no corresponds to the answer The #rstats hashtag on Twitter for the question Which of the following resources do you use for support?). In addition, they do not like to use it as a medium for R community news (question Q20). They consider themselves as outside the R community.

On the bottom, in contrast, there are individuals who tend to consider themselves as part of the R community. They attend general R user group meetings and they use Twitter. Twitter would be their preferred medium for R community news. 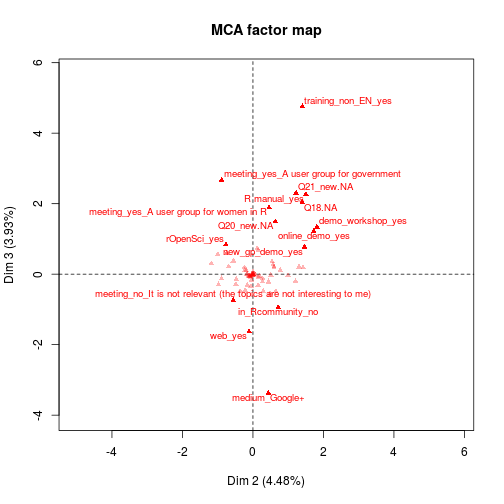 Only demographic characteristics that are significantly related the R community profiles are represented. An analysis of variance with demographic variables as covariates, and the coordinates of the individuals on the dimensions as explanatory variables, has been performed. 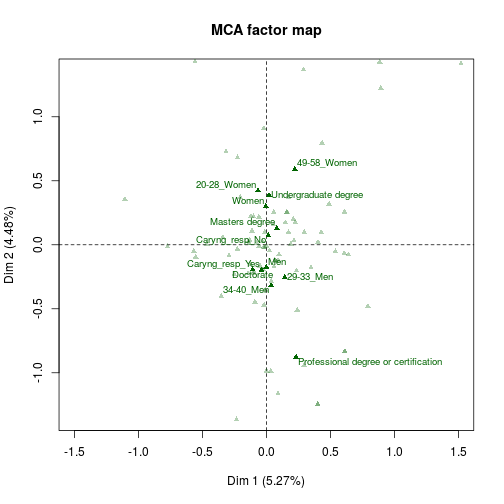 It appears that people having an undergraduate degree or a master degree are located at the top of the graph, while those with a doctorate are at the bottom. This would imply that people with undergraduate degree or master degree are more likely to consider themselves as outside the R community than people having a doctorate. The same comment holds for women versus men. It is interesting to note, caregivers for children or adult dependents tend to be at the bottom of the graph, while non-caregivers are on the top.

We represent the age categories on the map since some confounding effects with other demographic variables could explain the previous results. Youngest people tend to be on the top of the second axis, which suggests that they consider themselves as outside the community. 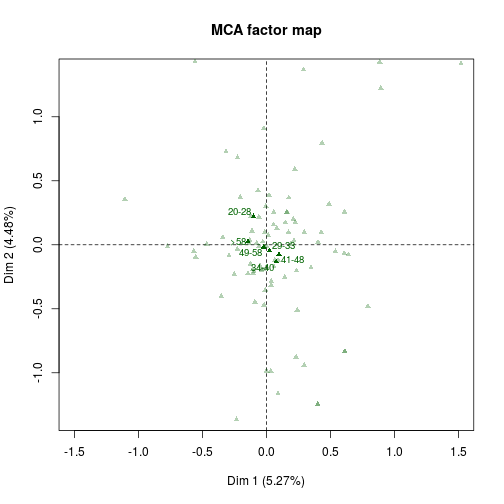 To get more insights into this possible confounder effect, we created a new variable sex-age and represent it: 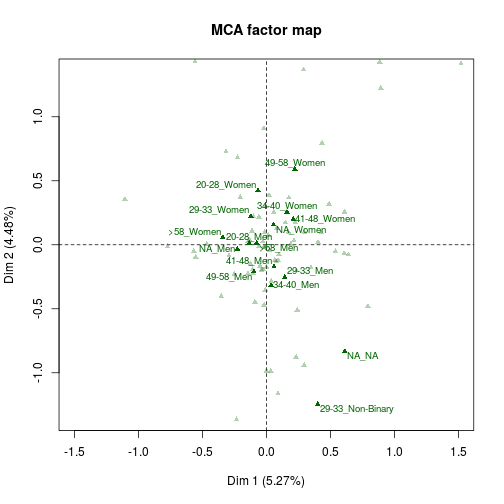 It highlights that both young (men and women) and women do not consider themselves as part of the R community.

A clustering of the participants is performed from their answers to questions about their involvement in the R community. More precisely a hierarchical clustering is performed on the principal components of MCA. The rationale is to improve the stability of the clustering by building it from denoised data rather than from the original dataset1. Several rules can be used to select the number of components used for the clustering. Here we choose 44 dimensions which corresponds to 95% of the projected inertia (variance) of the data.

The number of clusters is chosen according to the barplot of the inertia gains which suggests a partition with 3 clusters. However, this clustering is not relevant since most of respondents are in the same group:

We choose to keep 10 components as this will keep enough information, while highlighting a new cluster in the previous big one. 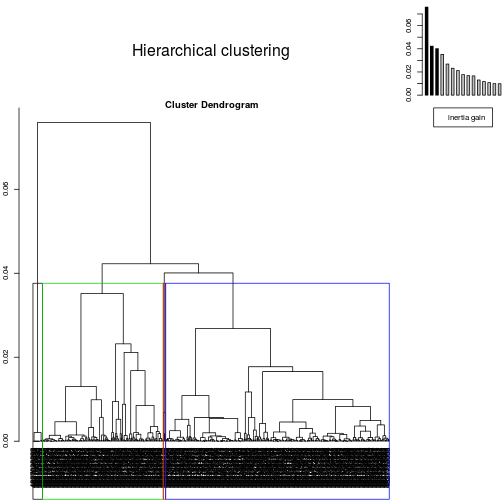 Respondents are grouped in the clusters as follows: 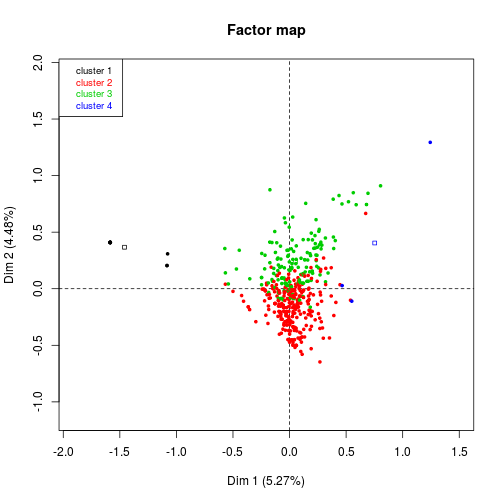 From the previous interpretation of the two first dimensions of variability, the location of clusters on the graph allows providing a brief summary of the clusters: cluster 1 is the group of non-respondents, while cluster 2 contains some respondents who feel they are part of the R community unlike the cluster 3 respondents.

To describe the first cluster more precisely, we use statistical tests to compare the proportion of each category in the cluster against the proportion in the population of the respondents.

Unsurprisingly, there is an over-representation of people that didn’t answer the questions about the involvement in the R community. Using the demographic characteristics, we can see that they are mainly from the industry.

The following categories are over-represented in cluster 2:

We studied the categories under-represented in the cluster. However, since most of variables are binary, we do not get new information from this table. We note however that young people are under-represented, as well as people who didn’t participate in R user group meetings because of inexperience.

In this cluster, there is an over-representation of those who adhere to most of the proposals to increase their participation in the R community. Most of them have never participated in a user group meeting. The cluster gathers a large number of people who use blogs to get help, but also a large proportion of people who do not use Twitter. They prefer to use a medium like Facebook or mailing lists for news.

From a demographic point of view, the cluster contains a significantly higher proportion of women than the respondent population, and a larger proportion of those with a master’s or undergraduate degree. People under the age of 30 are also over-represented.

Note that we need to be cautious concerning the interpretation of the clustering as it varies depending on the number of MCA components selected. The stability of the solution should be investigated further. In addition, the number of individuals per cluster may slightly vary as there is a “consolidation step”1 which is applied, i.e. a k-means algorithm applied after the hierarchical clustering.

Missing values occurring in the questions relative to the involvement in the R community often occur on all the questions simultaneously.

Two main groups of respondents have been highlighted:

In addition, since we recoded many variables, we could make recommendations for the next questionnaire. In particular, we suggest using “yes” and “no” answers for the checkboxes to distinguish missing values from “no”.